My Alaska, Too combines writing and images to reveal multiple perspectives of people when they wonder, “What is Alaska like?” The result is a portrait made up of samples from people who visited for a short time or lived here long enough to call it home.

Printed on the top row of glass are edited comments by people who live in Alaska addressing why they live here. It seemed to us that whether they moved here or were born here there was an attitude about being or of passage growing up Alaskan is deciding to stay or move.

The ribbon of six monitors display photographs tagged with various unique Alaska subjects. Every twelve hours (7AM to 7 PM) the computers that search for the pictures retrieve more than 50,000 photos. They are made and shared by many individuals who have in common their experiences in Alaska. The collection of images seen over time shape what is commonly and uncommonly a dynamic state of being in Alaska.

On the third row are various forms of poetry written by Alaskan writers. They were selected to reveal the relationship that these artists have with the landscape, nature and people in Alaska. Their work is ironic, humorous and serious. It requires more time and contemplation than the content above it but the poems provide an opportunity to glimpse at the sublime order and perspective of Alaska felt by Alaskans.

There are many others who contributed to this project, we gratefully acknowledge:

The glass on top are quotes taken from everyday folks, either from overhearing them, asking folks, or blogs. Thank you for your contributions.

The glass on the bottom includes poetry from Alaskans.

You Haiku selected Poetry Contest winners for the years 2005-2009 published by the Anchorage Press:

It Begins in Ice by Eva Saulitis originally appeared in Alaska Quarterly Review, Volume 24, No. 1 & 2, Spring and Summer 2007.

At Fishcamp by Renee Singh originally appeared in Alaska Quarterly Review, Volume 24, No. 1 & 2, Spring and Summer 2007. 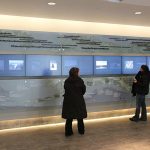