Requiem for Philadelphia was a multimedia collaborative performance work.As a new transplant to Philadelphia the impact of the gun violence was intense and as an artist interested in social relationships the issue became personal. My response was to enlist the collaboration of my partners, Stephen Jamison, Sandra Camomile and Royer Smith.

They, too, became inspired to address the subject and we stitched together an evening during Social Justice Week where the audience watched video, listened to music, a play, and opera voices and lit a field of origami lilies with multi-colored glow sticks.​For my part, I designed an installation of two video projections, and an audience participation event that brought attention to the scale of the problem.​

Time was represented on one video that projected a digital calendar above a large set of numerals. Numbers counted up the year from 01-01-07 to 12-31-07. Below the date was displayed the number of murders that eventually accumulated to 392.​

Place was the subject of the second video projection. It was a silhouette map of Philadelphia with a set of red dots superimposed to represent where each murder took place. As the video played each dot became a the name of a victim that zoomed out until it disappeared.

To signal the audience participation, a large speaker played the sound of 45 caliber gunshots and then a pair of opera singers, a baritone and soprano, sang the letters b-a-n-g and the word bang-bang.  Audience members were on a second floor balcony were instructed to retrieve glow sticks from the buckets along the rail, bend them to make them glow and in a gesture of remembrance throw them onto the lawn where a field of origami lilies had been placed.​

The event ended with the tolling of the La Salle bells chiming 8 pm. That was luck. 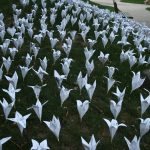